About Becky / About Fabrizio

When I read the texts of Hard Wear Beauty about Fabrizio Tridenti I felt I could have written it myself. When I saw his work, I wish I had made it myself.

Distance really made a difference with the collaboration project. The way we worked this project was to use some of the works of Fabrizio already in the country. There were many pieces at Masterworks, so we decided that I would do work in response and complimenting those pieces.

Some of Fabrizio’s work for Objectspace

In finding bits and pieces to make new pieces with, I’ve met many interesting and generous people. A plumber friend said that there are so many  small specialised hardware shops in Petone that you could make an atomic bomb. I think thats probably true.

Also weird objects used in cars and motorbikes. Pipe, wire, copper things. Goodness knows what they all do. But enough to make interesting

When Fabrizio was in Wellington last year we’d gone to Bunnings to look at hardware, and Sahaja had taken the wonderful image I’ve used as a background for the pieces.

Objectspace did a great job with the exhibition. The whole show looked great and really cohesive.

For a while I went down a different track while discovering Ben Nicolson before Fabrizio dragged me back to hardware. Thats what I’ll be playing with next. 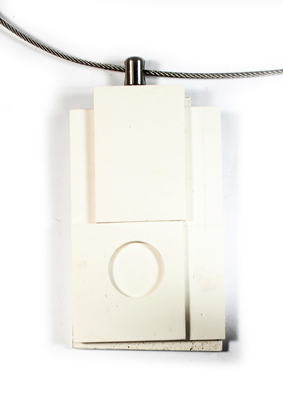 Set-up at Schmuck. I’m keeping the home fires burning. I wish I was there to see Fabrizio’s show at Schmuck. 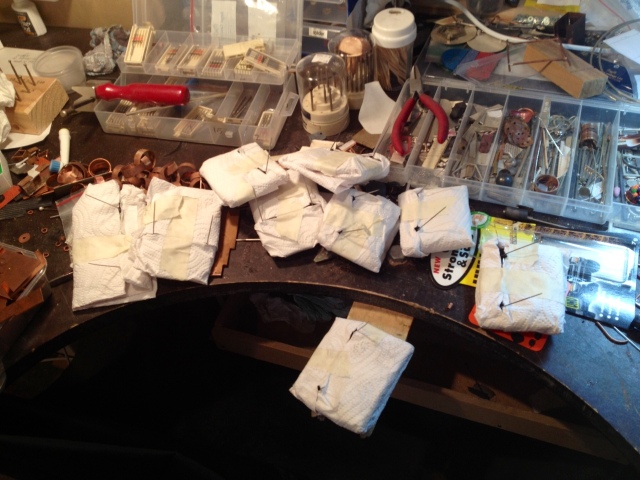 After talking with Fabrizio I’ve decided to go back to using colour.  Fabrizio suggests going back to look at previous work and developing along a similar theme.

I’ve made models and moulds and started casting in plaster resin. I think plaster resin is not strong enough, so I add lots of PVA, then do a layer of resin, and another layer of plaster resin. That makes them really strong.

Add different textures and materials. Take the backs into consideration.

I call the one above Mary Quant. Using the technique to look like peeling wallpaper. 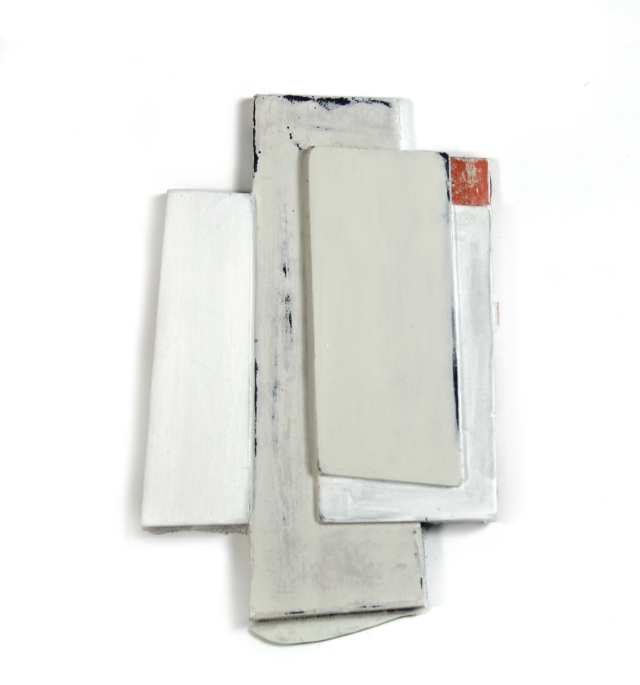 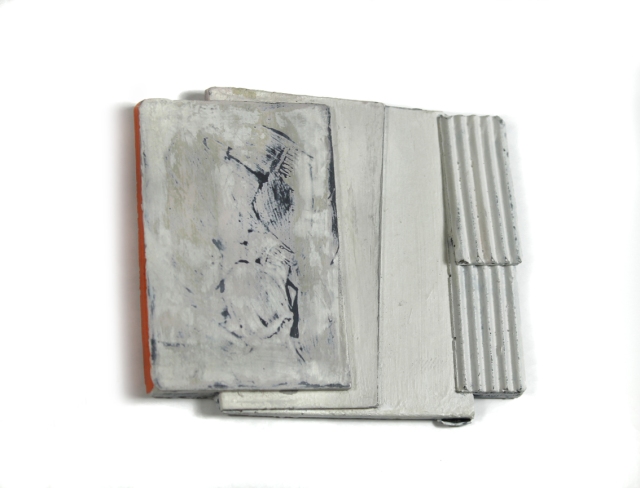 I think this one is my favourite.

Working on the Handshake book with Peter, Hilda, Mary-Jane and the Whitireia Publishing Course 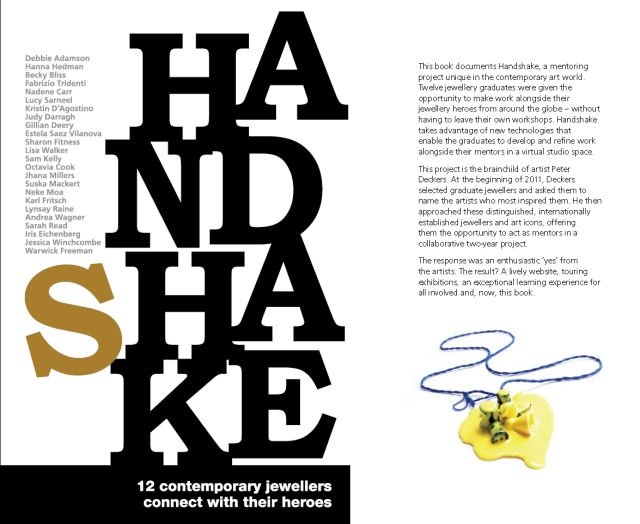 Handshake at the National

Continuing on from the necklace I had accepted for the Masterworks Neckware show, I experimented with different forms of rubber. Bicycle, car and truck tyres. Industrial bladders. I rang a company in Palmerston North to ask whether they had any used bladders and spoke to Peter Torrence at the CEG group. The next thing I knew, there was a courier arriving with some new bladders in it. I contacted him to ask about cost and courier etc, and he said he’d been into the website and seen what I was doing and was very happy to give them to me. It restored my faith in human-kind!

I basically cut and knot the rubber. It’s a lot of fun. Fabrizio and I started playing with this when Sahaja and here were staying in February. One day they arrived home with a pile of bicycle inner tubes.

These 3 below were in the Emerging Artists exhibition at the Academy of Fine Arts in February. 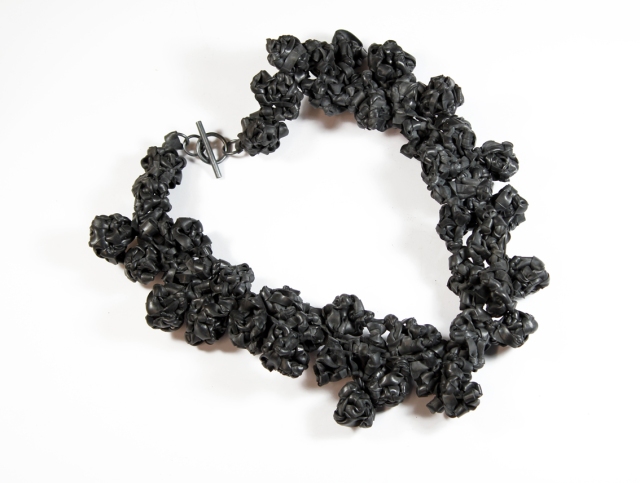 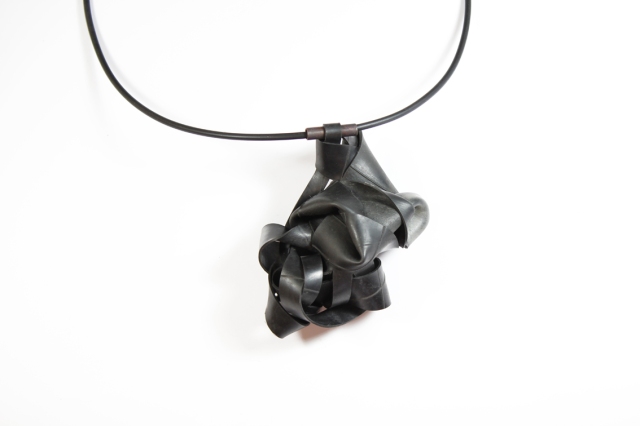 Uber-schmuck. Fried brain after seeing so much in Munich. I’ve only just started experimenting again.

I have a new sign on my wall: Aesthetics/Intrigue/Sensuality/Sculptural appeal

Here are some plays:

I don’t know where any of these will end up. 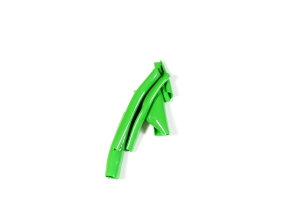 I first went to Vasto where Fabrizio and Sahaja live. They met me in Pescara with Jackie Chan, who was also staying. 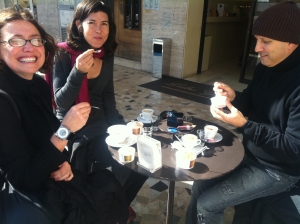 We explored Vasto for a couple of days before driving up to Munich. (10 hours non-stop) 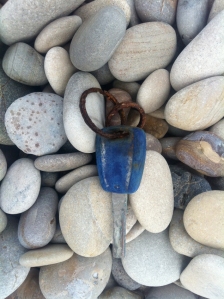 The 4 of us hung out most of the time in Munich. There were about 12 New Zealanders, plus Fabrizio and Sahaja who have become honourary ones.

The first day in Munich we went to the messe where Schmuck was held. Its hard to give the concept of size. Schmuck is part of the annual trade fair at Munich. If you imagine a hall bigger than the Wellington overseas terminal full of exhibits, but there are 5 of them in a row, and Schmuck and Talent take approximately a third of one of them.

Added to that are the contemporary jewellery shows. We would leave the hotel at 9.30 am and return about midnight, having seen 8-9 exhibitions.

It was a shock to realize that of the famous jewellers still have to have part-time jobs, unless they teach.

After Munich I went to Amsterdam with Peter and Hilda. While there we visited Ted Noten Atelier then had dinner at his house.

A card in Ted’s workspace. Theres some truth in this!

After a year of Skype communication, Fabrizio and Sahaja arrive in New Zealand as speakers at JEMposium. I went up to Auckland to meet them off the plane and settle them in for his Objectspace exhibition with Manon van Kouswijk. (They looked just like they did on Skype. I was surprised.)

After flying non-stop for over 30 hours from Italy, they weren’t going to miss anything while they were here and insisted on going to the opening of Restrospect at the Pah Homestead, then out to dinner.

Several days later they were in Wellington for JEMposium. They won the audience over on the first word, when Fabrizio said ‘okay’ and Sahaja translated ‘okay’.

Fabrizio and Sahaja gather friends wherever they go with their friendliness, openness and generosity. I’ve certainly been very lucky with my mentor!

But it doesn’t stop there. A few weeks later I was suddenly off to Schmuck.

Christmas and JEMposium intervened before the Toi Poneke show. I continued with similar work to the Masterwoks show.

I am getting comments from people about lack of colour.

Fabrizio and Sahaja have arrived in New Zealand for the symposium.

Overwhelmed by two exhibitions in September, I needed a break. Now its very close to deadleine for Masterworks show in December.

Had a very fruitful discussion with Fabrizio. His suggestion that I sit down at bench with some metal and solder, empty my head and start soldering.

This is my first experiment. 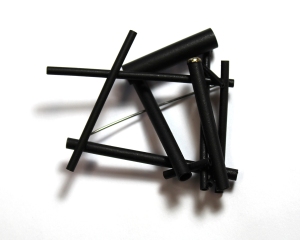 This is lots of fun. I could make these all the time because you never quite know what is going to happen. I love the architectural forms that start to happen.

Unfortuneately they are starting to look a bit like Fabrizio’s work.

I’m trying to bring a bit of my own work back into the piece.

I am continuing exploration with colour and rust. I find the most successful is to use a very limited colour palette. 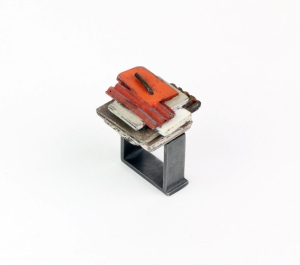 I’ve found plaster resin too brittle. If I’m making something to sell, I have to know it will have some permanence. So now I’m recreating the same deconstructive feel with resin. Its a weird thing, but I like the paradox, which also reflects on society.

I’ve begun to introduce other materials such as tin.

I’ve had the hard word to start blogging, so here’s a start…

There’s so much happening in the jewellery world at the moment, what with Handshake Sydney coming up soon, and the Jemposium in February 2012 in Wellington.

And exciting for me, Fabrizio and Sahaja are coming to New Zealand to be part of Jemposium and are planning to stay 3-4 weeks and travel around the country a bit.

I’m about to start Italian lessons.

Fabrizio’s first language is Italian so I talk via Skype to his wife, Sahaja, who then translates. We talk about once a month. When I have something to show him, I photograph it then email the images before we talk. Then we make a date to talk, usually early in the morning our time which is quite late at night for them.

I started off skyping at home but now I do it from my studio as I’m closer to the work and can jump up and get things to show him as needed. He is in his studio as well so can do the same.

We then work through the images discussing what is working and what isn’t. He sometimes draws possible solutions for issues he sees. Our sessions are really focused. I am overwhelmed by how generous both Fabrizio and Sahaja are and I feel really well supported by them both.

I had an opportunity to send a finished piece to Fabrizio via Karl at Schmuck. This was extremely useful because he could see materials, size colour etc. 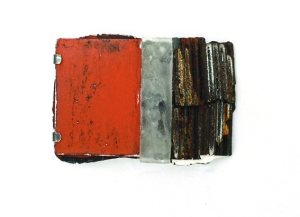 I had been making cardboard models from which I then made a mold. I cast them in plaster resin. After making several and starting to put on the backs, I realised that the plaster resin, although it follows my palimpsest theme, really was too brittle. I then had to remake them in resin and reapply colour.

What a great find! I’m looking forward to really playing with this material.

Sometimes in his critique, Fabrizio offers structural advice, sometimes it’s encouragement, sometimes like in the above example it’s a new material

5 Responses to Becky and Fabrizio